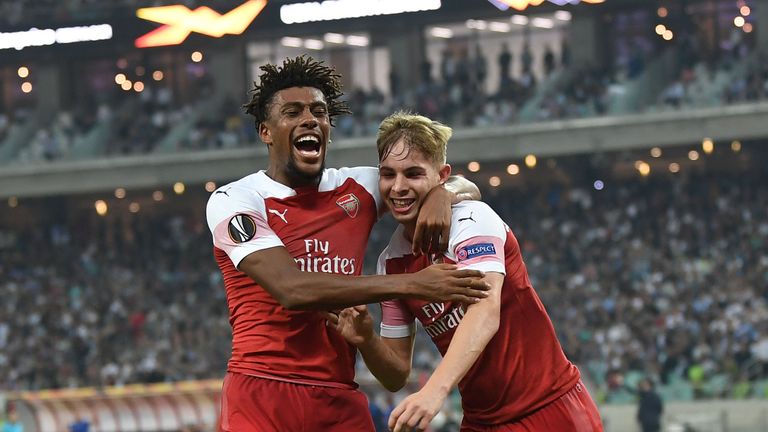 Three maiden goalscorers helped Arsenal maintain their 100 per cent start in the Europa League with a 3-0 victory over Qarabag in Azerbaijan on Thursday.

Sokratis Papastathopoulos’ got the Gunners off and running inside four minutes when he deflected a Nacho Monreal header beyond the wrong-footed Vagner in the Qarabag goal.

Eighteen-year-old Emile Smith Rowe marked his second Arsenal start with his first senior goal on 52 minutes, before Matteo Guendouzi wrapped up the victory with his first goal for the club 11 minutes from time.

Arsenal did not have everything their own way in Baku, though, with goalkeeper Bernd Leno called into three decent saves throughout the game.

But an eighth straight win in all competitions sees the Gunners cement top spot in Group E.

Man of the Match: Alex Iwobi.

Arsenal made the dream start in Baku with just four minutes on the clock. Captain Monreal rose high to meet a Mohamed Elneny corner and his goal-bound header was deflected in off Sokratis – his first goal since joining the club this summer.

Smith Rowe, making his first start in the Europa League, should have doubled the Gunners’ lead on 18 minutes but he could not stretch enough to convert Sead Kolasinac’s cross.

The chances kept on coming for Arsenal as Danny Welbeck glanced a free header wide from another Elneny corner three minutes later, but the Gunners’ reluctance to put the game to bed invited pressure from Qarabag.

Mahir Madatov drew Leno into action for the first time with a near-post drive shortly before the half-hour, and the German was called upon on 39 minutes, this time to parry Filip Ozobic’s powerful shot through bodies.

Rob Holding and Nacho Monreal were the only Arsenal players to retain their places from Saturday’s win over Watford as Unai Emery made nine changes. Sead Kolasinac made his first appearance since that final game of last season while Emile Smith Rowe was handed his first Europa League start.

Qarabag captain Maksim Medvedev lashed an effort into the side-netting as the hosts ended the half strongly, and they had the ball in the back of the net within four minutes of the restart when Madatov slotted the ball under Leno, but the offside flag came to Arsenal’s rescue.

Three minutes later and Arsenal were two to the good as Alex Iwobi released Smith Rowe and the youngster showed great composure to slot his first Arsenal goal through the legs of Vagner.

Qarabag pushed for a route back into the game but suffered from a lack of quality in the final third. But any hopes of a comeback were extinguished when Guendouzi picked out to bottom left-hand corner at the end of an Alexandre Lacazette-led counter on 79 minutes.

There was still time for Leno to produce another fine save, this time to tip Zoubir’s rasping drive over the bar, as Arsenal secured a clean sheet with their second win in Europe this season.