Singer, Davido dragged the heck off  a friend  for mocking his uncle, Senator Ademola Adeleke who appeared on Channels TV, stating that he will challenge the Osun Gubernatorial results at the state tribunal and retrieve his ‘stolen’ mandate .

The insult occurred after Davido’s friend identified as Oluricky on Instagram,  mocked the PDP governorship candidate in the Osun state election, Senator Adeleke for his interview on Channels TV, stating that Adeleke was not prestent for the Governorship debate on Channels TV but deemed it fit to appear on the same platform to complain about the result.

Lolz he wasn’t present for the Osun State debate Channels TV held back then, he is present to announce he is going to court.

Olu Ricky? Ur really here commenting this about my uncle and Ull, see someone and be smiling in their face! I considered you a friend! Bitch Behaviour, smh fuck you x2..same way you weren’t present for court when they were about to deport your FRAUD ASS! Fucking hoe! I hope to see you soon 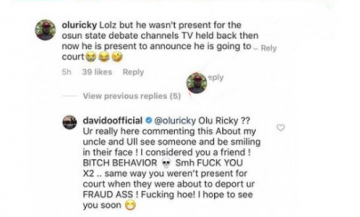 About Emir 9583 Articles
Legend || CEO Naijaphobia.com.ng, A Native of Osun State , Base in Bariga Lagos state