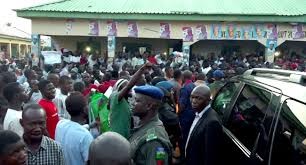 The National Working committee (NWC) panel in charge of the All Progressives Congress (APC) governorship primary election in Lagos state has distanced itself from the ongoing exercise. The committee opposed the option A4 mode used in the election, expressing preference for secret ballot system.

Option A4, still known as open ballot, is a system where voters queue behind the agent or representative of their preferred candidates while secret ballot system is a process where a voter’s choice is confidential.

Babajide Sanwo-Olu, a former commissioner of the state, is leading Akinwunmi Ambode, governor of the state, by a landslide in the results of the election announced so far.  The exercise is currently holding in over 300 wards in the state